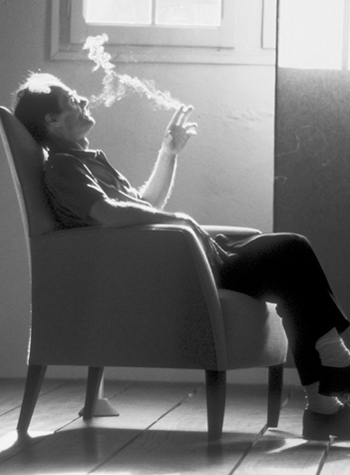 In his pursuit of making durable objects, Carles Riart aspired to become a craftsman of design. Riart, the first author to be edited by Santa & Cole in 1985, is a unique case in Spanish design, due to his peculiar interpretation of tradition and his introspective attitude. In 2011, he received the National Design Award in recognition of his career.

Carles Riart, borned in Barcelona in 1944 has recently recieved the National Design Award 2011 as a recognition of all his work.     Carles Riart studied at the EINA school of design. He teached there from 1976 to 1978, and he also improved his training with a cabinetmaker.   When he was nineteen years old, Riart founded the Gris shop of design-led objects. He also did the interior design of some movies, and designed many well-known spaces in the coolest Barcelona: pubs, shops and galleries such as the Montse Guillén restaurant (1981), the Piano Modas shop (1981), the Snooker Club (1985), the furniture for Fernando Amat's house at La Pedrera (1985), the Palau de la Virreina's furniture for the Barcelona's city council Culture Department (1986), Ovideo TV's van (1989), the Dou Deu shop (1995), and many others. His work has been in many exhibitions, and he has received many awards: the Delta de Oro ADI FAD (1970 and 1974), la Opinión award (1979), Delta de Plata ADI FAD and FAD interior design awards (1986), Furniture Contemporary Resources Council award (New York, 1983), European Top-Ten award (Khöln, 1994), Grand Prix of the Presse Internationale (Paris, 1994), or the Maestro Artesano diploma by the Centro Catalán de Artesanía, among others. Moreover, his Penjador Ona has been selected by the MOMA for its permanent collection. All of this acknowledgement has had a reflection in industry, in fact the prestigious company Knoll International has manufactured some of his pieces. Latetly he has recieved the Spanish Nacional Design Award (2011) as a recognition to all his career.    Some of Riart's most outstanding and brilliant pieces are: the Carlos Riart Chair (1979), the Vallvidrera armchair (1978), the Cómodo sofa, the Casas chair, the Ojalá and Pedrera chairs (1975), the Desnuda chair (1973), or the innovative Colilla hanging lamp, that Gabriel Ordeig readapted afterwards for Santa & Cole. In 1989, Riart started to work on what would become the most emblematic image of the Barcelona '92 Olympic Games, that is, the arrow on fire that inaugurated the Games, the main protagonist of a magical and ephemeral moment of worldwide expectancy. Riart has also worked on various customized furniture collections, such as the Muebles Especiales (1976), Útiles (1992), Objetos Perdidos (1996) or the set designed for Josep Carreras (1996-2000) together with Pepe Cortés. All Riart's pieces deploy a sensual conception of comfort, of formal poetry, talent and strength.

Previous Antoni de Moragas i Spà
Next Causas Externas
Go to Top
We use cookies in our website to give you the best service posible. Read more here.