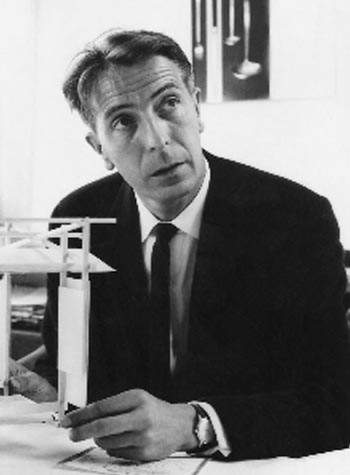 British designer Robert Heritage was commissioned to carry out the furniture design project for the Queen Elizabeth II ocean liner in 1968, together with Ernest Race. He is the most awarded designer by the Design Council. In 1953, he founded his own studio where he designed furniture and lamps. Furthermore, he was a furniture design professor at the Royal College of Art in London.

Born in Birmingham, Robert Heritage studied art in his hometown, and from 1948 to 1952 he attended the Royal College of Arts. In 1953, Heritage set up his own studio, that he focused on the design of furniture and lamps both for British and foreign firms, especially for the Concord Lighting Limited company (a Rotaflex Limited company). His spotlights have been much imitated, as well as his idea of using them in private livings has spread internationally. Some of Heritage's designing projects are the QE2 chair, innovative for its technology, a chair of aluminium alloy for Race Furniture, that was awarded in 1969 the Council of Industrial Design prize; the Pan Parabolic lamp from 1973 for Concord; or the Subeybaja table, that he designed with Roger Webb, edited by Santa & Cole, a table that can be adjusted to seven different heights. Heritage has also been professor at the London Royal College of Arts. He is the most awarded designer by the Design Council.

Previous Ramón Bigas
Next Roger Webb
Go to Top
We use cookies in our website to give you the best service posible. Read more here.