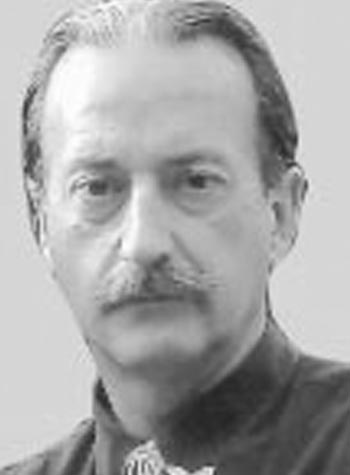 Ramón Bigas embodies the multidisciplinary professional who drew from radical principles to dive into the design of everyday objects. Some of his most important works include the Spanish high-speed train and the holder for the flame for the Barcelona ’92 Olympic Games. Bigas has also developed projects in industrial design, interior design, graphic design, and temporary exhibitions. From 1995 to 2001, Bigas was president of the FAD (Fostering Arts and Design).

Although Ramón Bigas began to study physics at the University of Barcelona, he soon decided to work as a designer and artist, and set up the ADAssociate Designers studio with Pep Sant in 1981.Among his industrial design projects, we may stand out the Spanish high-speed train, or the holder for the flame for the Barcelona '92 Olympic Games. Bigas has also developed designs projects in interior spaces, graphic image, exhibitions, lamps, tables, offices, and images. He created, for instance, the Micro lamp, a sort of minimal giraffe, or the Ramon chair. From 1995 to 2001, Bigas was the director of the FAD association.Ramón Bigas firmly believes that above intuition there is seriousness and pragmatism, even if he also goes for a little thoughtlessness in life: "because if not, one would not have children, make trains, nor move, and then, of course, one would not be able to live. What matters is well-done job."

Más información: www.ramonbigasdisseny.com/
Previous Miguel Milá
Next Robert Heritage
Go to Top
We use cookies in our website to give you the best service posible. Read more here.