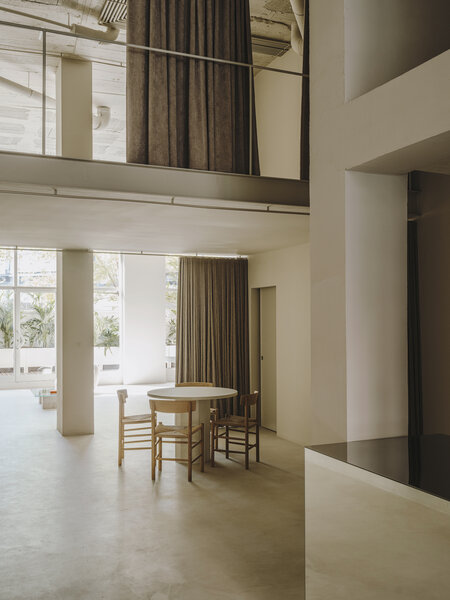 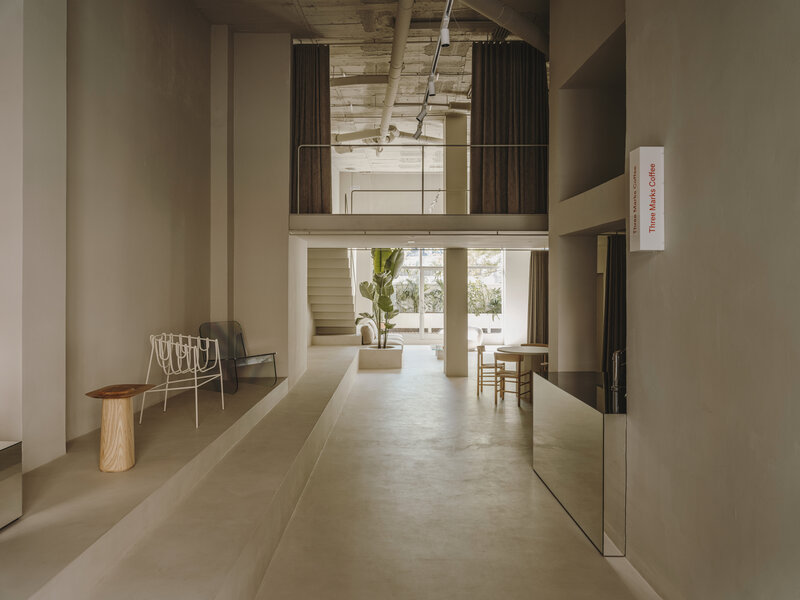 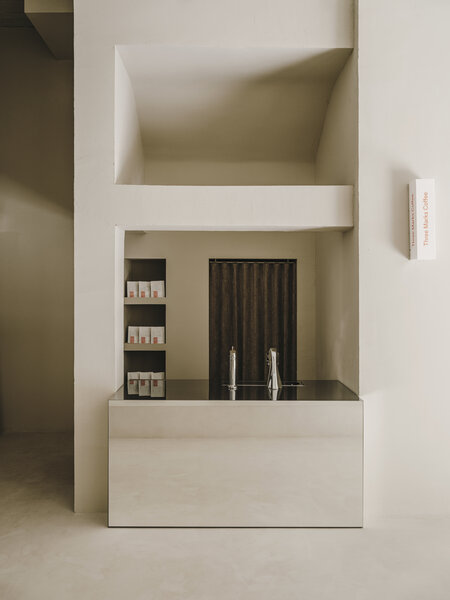 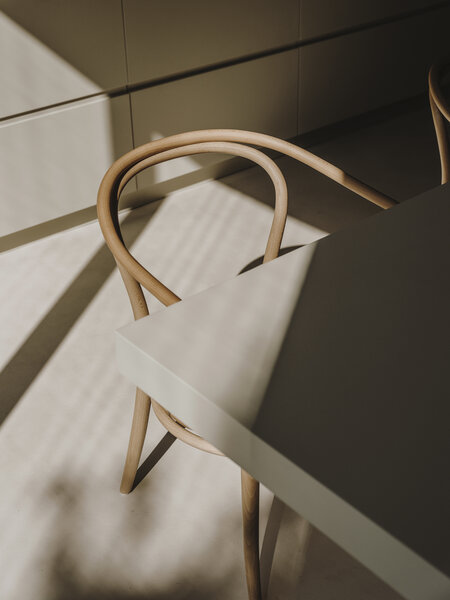 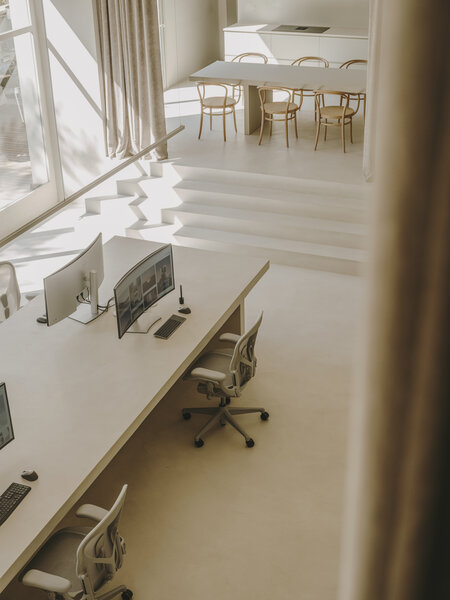 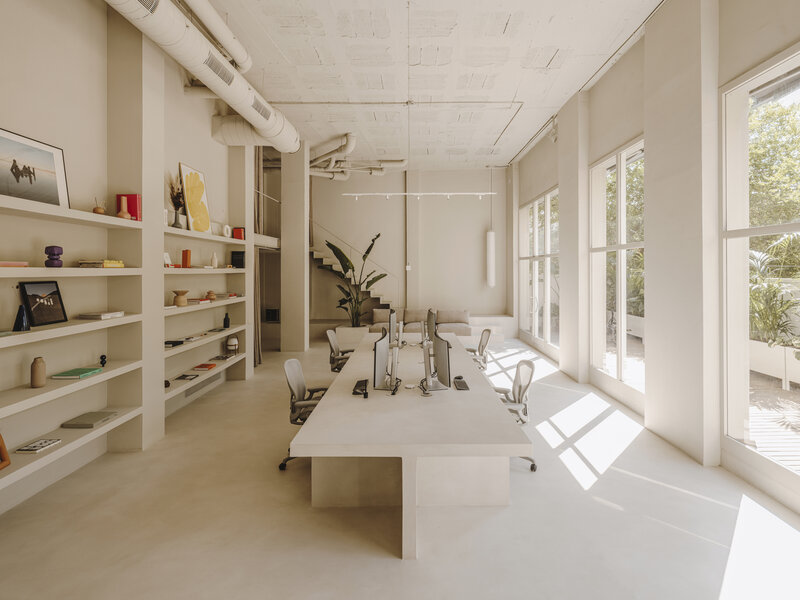 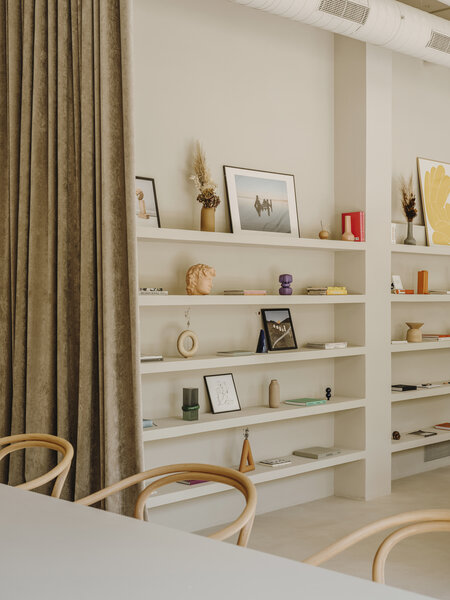 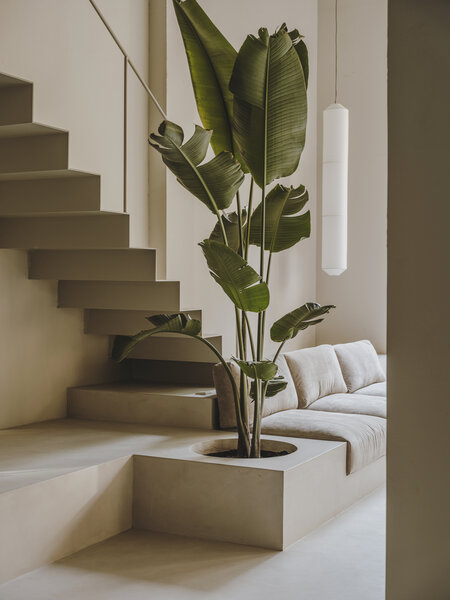 Poblenou’s neighborhood in Barcelona, is home to the new Six N. Five multidisciplinary studio. A project by Isern Serra that transcends the standards of the conventional office in favor of serenity and creativity. Located on the first floor, at the street level, it is thought to combine public and private use in a natural succession of spaces through its L shape.

The rehabilitation starts with the emptying of partition walls and false ceilings to revalue the original concrete structure and the volume of the premises, generating an adjustable continuity through the thick curtain. A range of neutral colors and the predominance of polished concrete both on the floor and in the furniture.

At the entrance, a multi-purpose tier gives way to the cultural propositions and a specialty coffee area by Three Marks Coffee. As one moves towards the rear, private spaces emerge, a large work island facing the greenery of the terrace and the kitchen, which serves as a meeting room.

Integrated into the architecture itself, the seating area houses an inset planter and a custom-designed sofa upholstered in the same fabric as the curtains to maintain uniformity. The idea was to create an architectural sanctuary where craftsmanship was very much present. In the company of famous pieces such as the Mineral table by Ferm Living or the Pacha armchair by Gubi, the Tekiò lamp by Santa & Cole.

Its author, Anthony Dickens, fascinated by the subtlety of Japanese lighting, created this family of luminaires that adapt to the space. Hence its name, Tekiò, Japanese for adaptation. It represents the fusion of artisanal techniques with Dim to Warm LED technology, which allows the intensity and color temperature to be regulated. Dressed in handmade washi paper, it delicately illuminates the surrealism of Six N. Five.