Eduardo Arroyo developed early pictorial skills during his childhood, sometimes painting pictures and even publishing caricatures in newspapers. However, his passion was always literature. With the intention of becoming a writer, he studied journalism and moved to Paris in 1958, as Franco's dictatorship was still at its height and the climate in certain sectors had become harsh. Because of the difficulties of integrating into the French literary world, he began to frequent the community of Spanish exiles who had survived the Civil War, and he recovered his fondness of painting, which led to a galvanisation of his political commitment and criticism of Franco's regime. This awakened criticism soon became a hallmark of his work.

In 1960 he took part in the Salon de la Jeune Peinture (Musée d'Art Moderne de Paris), directed and made up of young artists under 40 years of age. There he met Georges Détais, an art dealer who one year later organised Eduardo Arroyo's first solo exhibition at the Claude Levin Gallery in Paris, which included a series of religious and military portraits.

In 1963, Arroyo became a member of the jury of the Salon de la Jeune Peinture at the III Paris Biennale, where he took charge of the space dedicated to the denunciation of totalitarianism and repression. He also exhibited portraits of the four European dictators: Franco, Mussolini, Hitler and Salazar; each with their respective national flags and emblems.

Eduardo Arroyo was expelled from Valencia, Spain in 1974, because of his anti-Franco activities; his exile hade a decisive influence on his creative career. In 1976, he decided to return to Spain after the death of Franco and the promise of the establishment of democratic freedoms. He returned to his homeland to commence a new stage of his artistic career, producing a series of works that dealt with exile. Some examples of these works are: “Reflexiones sobre el exilio”, “La vuelta de los exiliados”, “Regreso de Companys a Barcelona” and “Ángel Ganivet se arroja al río Dvina”.

We may distinguish two distinct stages in Arroyo's artistic career: during exile and after exile.

In the first, he adhered to the postulates of the New Figuration, and his work was thematically dominated by Spain, exposed from a standpoint of irony and criticism. He also worked as a set designer, collaborating with Klaus Grüber. After exile, he increased the weight of his pictorial narrations while adding to the context and concept of what being Spanish meant. His work from this phase dealt more regularly with national and international political issues.

Eduardo Arroyo's style was wilfully neutral and easy to read, but above all he was a multifaceted artist. Notable were his literary works “Panamá Al Brown” (1982) and "Sardinas en aceite" (1990). He also reinterpreted Calderón de la Barca's play "Life is a Dream" as a theatrical set designer. And in 1982 the Georges Pompidou Centre, in Paris, held a large, retrospective exhibition of his work, featuring more than one hundred and sixty works including oil paintings, drawings, watercolours, sculptures and scenographic material. Also that year, the Spanish government awarded him the National Prize for Plastic Arts. Eduardo Arroyo died in Madrid in 2018 at the age of 81. 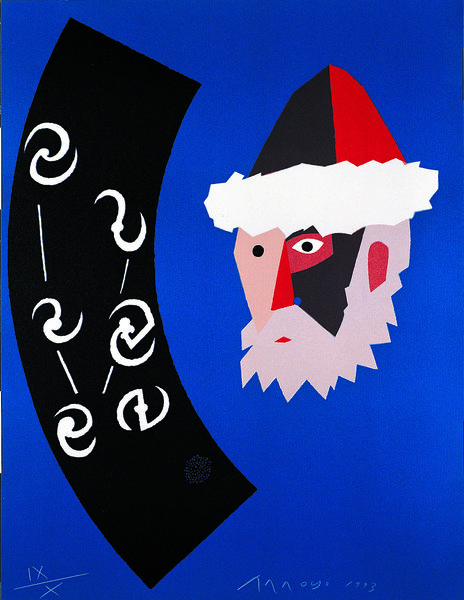