Christo Vladimirov Javacheff was born in Bulgaria in 1937 on the same day as his artistic and life partner Jeanne-Claude Denat de Guillebon, although she was born in Morocco. Jeanne-Claude died in New York in 2009, and Christo in 2020. The artistic duo met in Paris in November 1958 when Christo was commissioned to paint a portrait of Jeanne-Claude’s mother Précilda de Guillebon.  They soon became a professional tandem and married couple, although their works were initially signed under the name of Christo. In the 1990's they began signing as Christo & Jeanne-Claude since the artistic process of each work involved both artists.

At the end of the 1950s, Christo started wrapping small, everyday objects such as bottles or glass jars of preserves. The works became increasingly ambitious and he began to wrap larger objects. Among the most recurrent themes he proposed in his work were: wrap or repeat, fabric and colour, and scale. Christo & Jeanne-Claude wrapped small-scale objects and enormous ones, such as buildings, alike; changing people's perception and relationship with the construction as well as with the landscape. Evidence of this is the 2009 Santa & Cole Limited Edition "Wrapped Fountain" series.

One of the most emblematic examples was his proposal for the Reichstag in 1995, when he covered the German Parliament building with more than 100,000m2 of fabric and 15km of rope; the installation was visited by more than 5 million people. Christo's work encompassed natural landscapes too, as in the intervention involving the 178 trees of Berower Park in Riehen, Switzerland. One of the highlights of the proposal was the heterogeneity that was generated from a simple solution, and how it affected the perception of nature and reality.

Fabric and colour were the hallmark materials in Christo & Jeanne-Claude's projects. A supple material was used to envelop the object or element involved, hiding the details and extolling its more plastic condition, thereby accentuating the more radical colours and contrasts. Such is the case of "Surrounded Islands", an installation on the uninhabited islands of Miami's Biscayne Bay, among the artists' best-known and most interesting projects, promoted by the Pérez Art Museum of Miami. The project consisted of an artistic intervention involving 11 islands, which were surrounded by floating pink polypropylene fabric as a symbol of the unification and growth of local culture. Despite its short duration, "Surrounded Islands" had a lasting impact on the city's cultural history, resulting in Miami's recognition as an international centre for art. This particular project is an excellent showcase of the way the artists worked, as this intervention could not have been carried out without the help of more than 400 assistants. Another element was scale. The “Surrounded Islands” project was on a scale that surpassed architecture and achieved a territorial dimension.

Christo & Jeanne-Claude's work was financed using original items developed during the project process, such as drawings, collages or photographs, and from the sale of artworks. They saw each project as their offspring, although Jeanne-Claude always said her favourite work was the next one. Their last work was "The Gates", consisting of 7,503 vinyl frames installed along pathways in New York's Central Park. 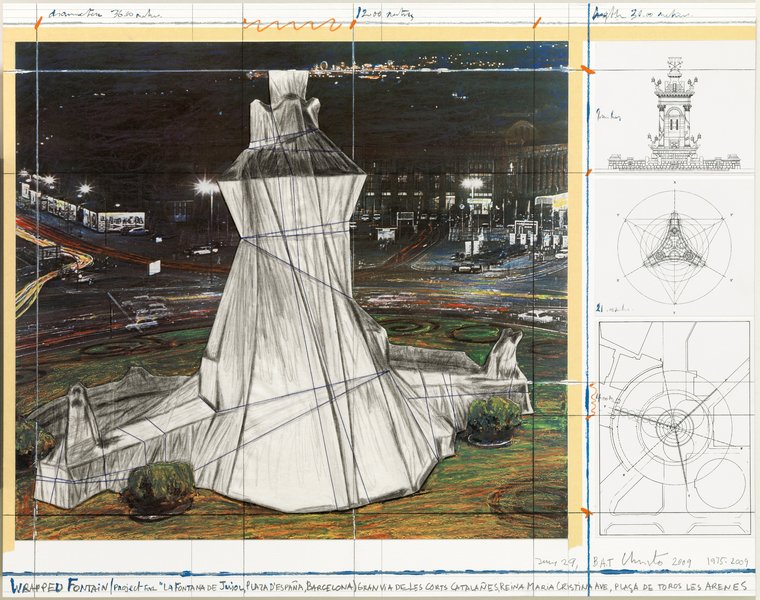