Àngel Jové is an artist who has shown an uncommon freedom in the world of design, which he was introduced to by Santiago Roqueta. He is considered one of the most representative pioneers of conceptual art in Spain, as well as being a movie and television star.

Àngel Jové was born in 1940 in Lleida, where he went on to study architecture, graduating in 1964. That same year he founded the Cogul group, a group that advocated informalism and, soon after, pop art. As a result of discussions and events at the group, Àngel Jové began to understand the breadth offered by art and, with a background in architecture, he began to experiment with the two disciplines.

His first artistic works focused on the use of everyday materials and reflected on how they generated shapes and spaces. His work became a cornerstone of the Catalan conceptual art movement, arguing that the concept of a work is its essence. Àngel Jové also produced pictorial work and has held numerous exhibitions since 1961 in Lleida and Barcelona, but also in Ottawa, Johannesburg and Berlin. His work always had an air of mystery and nostalgia, and he soon ventured into rebellious art, Arte Povera. The latter emerged as a reaction to the growing commercialisation of art and used photographic printing on canvas, photomontage and environments.

In the 1970s, Àngel Jové explored other artistic disciplines. At the beginning of the decade, he published a series of poetry books, Verbo Ser (Lumen, 1970) and Tratado de los Órdenes Arquitectónicos (Tusquets, 1971), a compilation of visual poems on existentialism. He then entered the world of cinema, starring in films such as "Bilbao" (1978), "Caniche" (1979) and "Angustia" (1986), all by Bigas Luna, and "Pasión Lejana" (1986), by Jesús Garay. In the same period, he worked as a scriptwriter and art director for TVE and TV3, as well as a graphic designer and illustrator for various individual clients.

Although initially Jové was not involved in the world of design, he was introduced to it by Santiago Roqueta when they were commissioned to design the interior of the Sala Zeleste in Barcelona. This project resulted in the creation of the Babel and Zeleste table lamps, both of which are tributes to alabaster, a material prone to picturesqueness and vulgarity, yet with a vast wealth of expressive possibilities. Both lamps made an extraordinary impression at the time, one that has not diminished over the years. A courageous rehabilitation of alabaster for the new democratic bourgeoisie, and at the same time, a manifesto of industrial Arte Povera.

Architect and filmmaker, actor and designer, Àngel Jové stands out as a multidisciplinary artist who revitalised Spanish culture across the board. 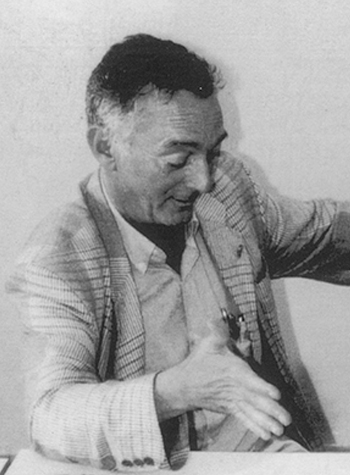 Santiago Roqueta, PhD in Architecture, professor of Drawing and director of the ETSAB (Barcelona School of Architecture), was an industrial designer, interior designer and artist. Roqueta played a crucial role in establishing the concept of good design in Barcelona. He created the furniture editing company Snark Design, which became part of Santa & Cole at the end of the 1980s. He also designed unique clubCarles Riarts and restaurants with the aim of revitalising Barcelona. In addition, Roqueta was the driving force behind the book publishing project between Santa & Cole and ETSAB to disseminate the work of the pioneering masters of Spanish design.