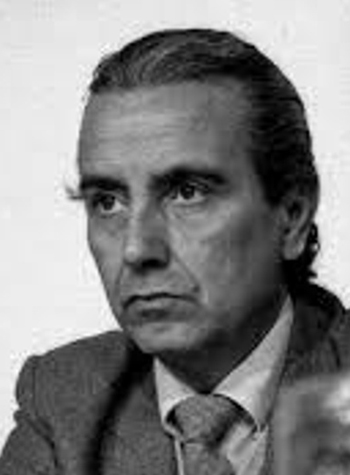 Since the 1960s, architect duo Federico Correa and Alfonso Milá have been amongst the most successful in Spanish design and architecture. Their work is inspired by the architectural heritage of the Modern Movement.

Correa and Alfonso Milá were both born in 1924, they were schoolmates and went to the same university, and finally received their doctorate from the University of Barcelona. They set up their architecture studio in 1953, thus enhancing a professional relationship and a strong friendship that has made their names inseparable. Correa and Alfonso Milá have devoted their career to architecture, interior design and industrial design, as well as to teaching. They have spread worldwide Spanish creation and promoted it in the international architecture debate. Their main influences have been the Modern movement, professors Josep Maria Jujol, Francesc Ràfols and José Antonio Coderch (with whom they collaborated for some years), and the architecture of northern Italy. Their work is an interpretation of the architectural inheritance of the great Catalan masters, and has ended up being a capital influence in the recent history of Catalan architecture. The Correa-Alfonso Milá style was distinctive already from its beginnings: they created several summer houses by the sea in Cadaqués, with built-in furniture integrated into their architecture, that many others have imitated later. They are also co-authors of the Olimpic Ring in Barcelona, and they created the restaurant of the Centro de Arte Reina Sofía in Madrid. Correa and Milá carried out as well the interior design of mythical leisure centers in Barcelona, such as the Reno restaurant in 1961 "that became a synonym of modern luxury", Flash-Flash in 1969 "that is still as modern and warm as when it was designed" or the Giardinetto in 1974. They also remodeled the office of Barcelona Mayor Pasqual Maragall. In recognition of their work, they have received many FAD awards. Correa and Alfonso Milá also carried out industrial design projects, creating furniture and lighting for interior spaces, which include for instance the chairs and tables at the Reno restaurant (edited by Santa & Cole), the Capilla fireplace or the Barceloneta armchair. Even if they created major architecture projects, Correa and Alfonso Milá used to say that most of the difficulties arouse in the area of design: "the creation process is so slow that you almost forget about it, it becomes eternal. Even when both activities coincide, as it did when we made the Olimpic Ring, the most difficult part was the one of creating objects." For that reason, they suggested industrial designer Miguel Milá, Alfonso's brother, to join them in order to get in charge of the furniture and lighting. Together with Miguel Milá they created the Diana lamp for Barcelona's Mayor office, also edited by Santa & Cole. Rationality is the main characteristic of Correa-Alfonso Milá as interior and industrial designers: "We work on the same priorities as we do with architectural projects: by rationalizing", as well as their concern to satisfy their costumers. Correa and Alfonso Milá represent the kind side, the humanity of architecture and design. Their projects are thought to cherish memories, taste, color, images, senses and emotions.

Previous Eulàlia Serra
Next Ferran Freixa Jové
Go to Top
We use cookies in our website to give you the best service posible. Read more here.